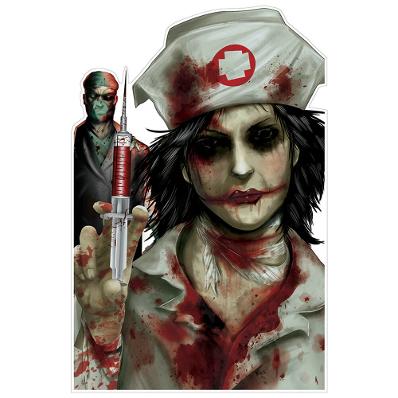 I have recently been experiencing lower abdominal pain. Nothing major. But for about 2 weeks, it hasn't let up. So yesterday, I went to the Doc. After an initial examination, he is suspecting diverticulosis. But in order to rule out anything else, he asked that I go to the hospital for a ct scan. My doctor's office called ahead, and the imaging department at the hospital said they were taking walk-ins today who have been referred, so they would see me as soon as I arrived. This was good. I could get my ct scan done, and potentially know as early as tomorrow what could be wrong and how to proceed with any needed treatments or further tests. But things did not quite turn out that way.

Upon arriving at the surgical hospital, I was immediately met with the usual Covid interrogations. "Do you have a fever?",  "are you having trouble breathing?", "have you traveled recently?", "blah blah blah blah blah?". You know, the usual. Then she asked me something which was new. She asked if I have received the Sars-Cov2 'vaccine'. Kind of none of her business, as injection records are a matter of medical privacy and are between me and my physicians, and not me and any random receptionist. But I played ball. She wasn't being overly rude or anything. I told her no, that I have not received the injection. She then asked "are you planning on getting it?". A little intrusive, but again, she asked politely. So I replied politely that no, I will not be getting it. She said ok, and typed something into her computer. I then signed in, and she directed me to part of the waiting room to await the nurse who would escort me back.

This part of the waiting room was segregated from the rest of the room into a square section off to the side. There were a dozen or so chairs. All empty except mine. I then noticed a sign on either side of this little square which stated "unvaccinated patients only". Because, well,  I am supposedly posing a danger to those who have been vaccinated against the virus that I have not been vaccinated against, so they might catch the virus they are vaccinated against from me, because they have taken a vaccine that doesn't actually vaccinate. Follow the science! But I digress. The point is, the segregation is no longer satisfactory at six feet apart. Which is weird, considering that only a handful of months ago, no one had a vaccine, fake or not. And at that time, no one had a problem standing in line next to the unvaxxed in Walmart, or eating at McDonald's next to a table of unvaxxed. But now, anyone who hasn't had the shot is super dangerous and according to some, should be executed! The media has done a wonderful job. There I go again. Ok. Rant over. Back to the story......

After literally waiting 2 hours, and watching several other walk-ins be taken back before myself, I approached the receptionist. I thought maybe I was forgotten. She apologized and attempted to tell me something about records needing prioritized or something, and that it would be a few more minutes. Again, I waited. For almost an hour. Finally, another person called my name and I was escorted to the back.

They took me to another office, where a nurse started asking me questions about my symptoms and verified some other information. After this entire process, she laid it on me. Why she waited to get everything done, I don't know. But she told me that I would have to return to get my scan sometime after next week. This was, according to her, because the lab techs on duty refuse to perform scans on anyone who is unvaccinated due to unnecessary risk. But they would be covered by another crew after that, and maybe they would be willing to do it. At this point, I could not be polite. I asked her "So before this shot existed, did these guys work? Did they just take the whole year off that we didn't have a vaccine out of fear of transmission?". And "Why even bother to segregate people in your waiting room if you refuse to treat un-vaxxed? Why not just tell the disobedient to leave?".  She urged calm and apologized. Didn't work. I asked to talk to someone in an authority position.  She left and returned after a few minutes with a PA. He reaffirmed what she said, and went into the whole "You know, the vaccine is free, and we can give you the first Pfizer shot right here today!". He sounded like some kind of car salesman. A very annoying one. I told them to forget it, and left. As I walked out, I heard someone say "There goes another one", as if this is a common thing in this hospital. Apparently, I wasn't the first one to leave because of their stupidity

I still don't get why they even bother to go through all of the check in procedures and even established a waiting area specially created for non-slaves. I don't get it. Unless it is some type of psyop thing to make someone say out of annoyance "fine, just give me the dang shot then!". I don't know. Still trying to figure that one out. But like with all of this tyranny, nothing makes sense. Part of brainwashing is purposely making everything confusing. If they can exhaust your ability to think on your own, they can insert whatever they want. Well, anyway, this didn't make sense.

To end the story: I informed my Doctor of this debacle just before writing my ranting post about it. He isn't too happy. And he is calling another imaging lab to see if they are indoctrinated into the cult or not. He'll hook me up with someone. He's a pro-vaxxer, but not a dillhole.

So there you have it. My first outright experience with this medical tyranny. It will get worse. And it will escalate to the point of some hospitals refusing to save lives of the unvaxxed if they come to the hospital with terminal illnesses or injuries. They will literally let us die on the sidewalk. It is coming to that. But not all medical professionals will be so shallow and indoctrinated. Keep the faith. Not all doctors will be willing to get people killed over lack of a shot which by their own admission doesn't vaccinate. Start networking now and find them. They are out there.

Oh, and to any leftist commie who may be reading this and thinks that we need to be killed for not taking your obedience shot (that doesn't vaccinate btw): how are you going to accomplish this? Please, come to my house and demonstrate. I would love to see it.